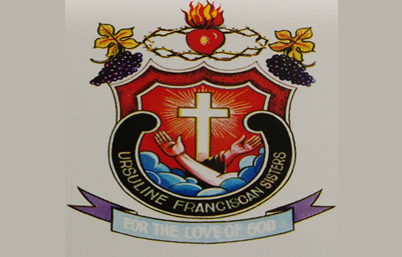 An association known as the Company of St Ursula, pioneered by twelve young women of Our Lady of the Holy Rosary Cathedral Parish at Bolar, Mangalore in 1887 started by Fr. Urban Stein S.J a German priest, was a muster seed when it was sown in Mangalore. The Company of St Ursula obtained the canonical status in 1934. The enhanced status accorded it a new name – Catechist Sisters of St Ursula.

The Congregation of the Catechist Sisters of St Ursula grew to be the Ursuline Franciscan Congregation in 1955 as a result of the affiliation to the Order of Friars Minor Capuchins of St Francis. This historic event marked the extension of the Congregation outside the Diocese of Mangalore and opened avenues to open schools outside the Mangalore Diocese. Sisters rendered their service in the field of education in schools administered by respective parishes. Alongside imparting instruction in schools, the Sisters offered career guidance education to women in tailoring, needle work and machine embroidery etc in different diocese in Karnataka. Later the Congregation left the security of their native surroundings and started their mission in North East and North regions of India.

Sr. Edilburga the Superior general of the time realized the vision of her predecessors of raising the Congregation to the Pontifical Status, which was secured on January27, 1995. The Ursuline Franciscan Congregation enlisted as the 40th member of the Ursulines of the Roman Union on October7, 2002.

The Ursuline Franciscan Sisters were invited to work in Uttar Pradesh by Bishop Cecil D’Sa of Lucknow Diocese at the behest of Fr. John Joseph OFM Cap, Mission Superior of the Agra Lucknow Mission. Through the initiative taken by the Superior General Rev. Sr. Ernestine D’Almeida, the sisters ventured in to an unknown land amidst the unknown people and culture on February 11, 1977 at Bareilly and Mirpur in Varnasi Diocese on February 25, 1977.

The North Mission was born to address the crude reality of suffering of the people caused by poverty of all kinds and levels. Though the ministry of Education is their primary concern they are involved in Medical as well as Social Developmental ministries dedicating themselves to the cause of the poor by involving actively in the struggles of the people, thereby enabling them to realize their dignity as children of God. Currently the sisters are rendering their service in Uttar Pradesh, Uttarkhand, Bhopal and Kolkata.

“You Have Not Only A Glorious History To Remember And To Recount But Also A Great History Still To Be Accomplished! Look To The Future, Where The Spirit Is Sending You In Order To Do Even Great Things”.

These are the words of Blessed John Paul from Vita Consecrata (No 110). The Ursuline Franciscan Congregation has to journey a long way into the direction shown by the Holy Spirit. The Congregation has realized acceptably the ‘Unspoken Vision’ of Fr. Urbun Stein ; it has the mission of initiating a new kind of religious life by redefining its charism and re dedicating itself to the service of God , God’s people and the cosmos.